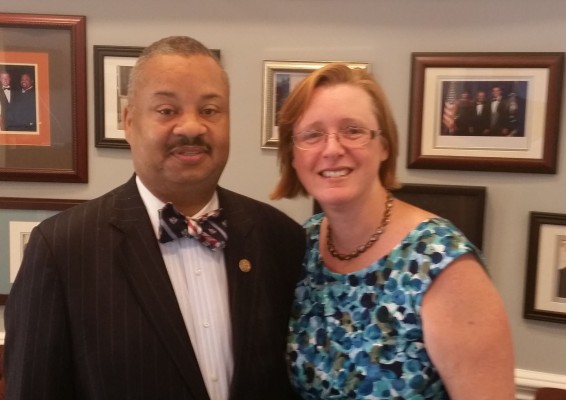 I was fortunate to have this experieince. Last week, I met with my Congressperson, Donald Payne, Jr., at his district office in Newark, New Jersey. I had requested the meeting to talk to him about the Lymphedema Treatment Act (LTA).

I began petitioning Congressman Payne a few months ago when I realized that he was not a co-sponsor of this important legislation. Through my work at the Lymphatic Education & Research Network (LE&RN), I had become familiar with the bill proposed by the Lymphedma Advocacy Group. LE&RN has been a long-time supporter of the legislation, it made sense to me, and I had asked others to call their representatives in Washington.

I was certain that Representative Payne would agree that lymphedema compression garments, which are medically necessary, should be covered by Medicare and insurance. I was less certain, given what I believed about government, that my voice could be heard. The government was so big, after all. Could I really make an impact?

The Lymphedema Advocacy Group assured me I could and pointed to a series of success stories, spearheaded by concerned citizens just like me. They were also willing to coach me, individually and through their webinars, on how to be the most effective advocate I could be.

My emails and telephone calls eventually led to sending information on the bill to Congressman Payne's legislative health aide so that his office could research the bill and led to my reaching out to his scheduler to ask for a meeting when the Congressman was in district on the Congressional break in August.

On the morning of the meeting, I took information from the Lymphedema Treatment Act's website with me. I had never been to my Congressman's offices. It was a pleasant and welcoming space and, as I waited, I saw staff members attend to constituents who came into the office and who called by phone. The staff was busy and committed to responding to people. People were, in fact, being heard all the time.

At the meeting, Congressman Payne listened carefully to what I had to say about the LTA. He asked a few questions -- about the legislation and about lymhedema in general -- and then sat for a moment to consider. Then he agreed to co-sponsor.

He had listened, was convinced of the fairness of the LTA, and agreed to act. Isn't this how, ideally, we expect government to work?

I write this to encourage all of you to reach out to your representative in Congress. If you are like me, you will learn a lot about how Congress operates and get to know your own representative a bit better. I hope your experience is like mine and that you will meet with success in petitioning for legislation that will greatly improve people's lives.

Visit the LTA's website to get started. Make that first step. The Lymphedema Advocacy Group is a great resource that can help every step of the way.

Laura Farrell is LE&RN's Marketing Communications Director. She can be reached at lfarrell@LymphaticNetwork.org and would love to hear from potential activists about getting involved. LE&RN proudly endorses the LTA.