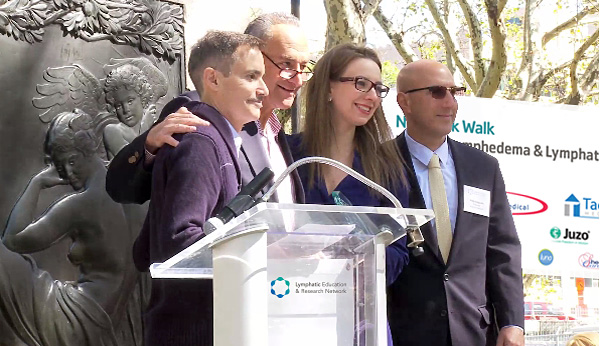 We have met with Senator Schumer several times over the years. In 2014, the Senator keynoted LE&RN’s New York Walk to Fight Lymphatic Diseases. Upon receiving LE&RN’s Advocacy Award, Senator Schumer forcefully told the attending crowd of lymphatic disease activists, “Researchers at the National Institutes of Health and across the country have been waiting for a signal that their profession is a priority in the eyes of lawmakers…Year after year, I have pushed for increased, predictable research funding so that researchers across New York and the country can continue to develop a strong workforce. In particular, I believe that it is time that lymphatic researchers become a larger part of this workforce. At long last, the NIH has the funding level it needs to uphold these priorities to make America a leader in innovative research once more.”

He continued, “I am a proud sponsor of the Lymphedema Treatment Act. No one with lymphedema should have to sit and suffer with this disease’s symptoms simply because their primary treatment is not covered by insurance. The Lymphatic Education & Research Network has taken on a great responsibility in promoting awareness of lymphatic disease and I believe Congress and the healthcare system should take their lead. It is the responsibility of Medicare to ensure that American citizens have access to the treatments that work best for them and I am glad to be a part of this push in the right direction.”

With Senator Schumer now Senate Majority Leader and President Biden stating his commitment to research, we look to 2021 to be the year when the commitments of past years are realized. Accomplishing our goals will not happen by chance. Change is up to lymphatic disease advocates from around the world.

Only you can do this.

Be ready to join LE&RN’s Lobby Days this year when we ask you to send your stories, emails, and letters to key legislators. With the passage of the FY2021 Appropriations Bill calling for the establishment of a National Commission on Lymphatic Diseases, we are dizzyingly close to major advancements in research and awareness. Let this also be the year that we see these goals realized, along with the passage of the Lymphedema Treatment Act.