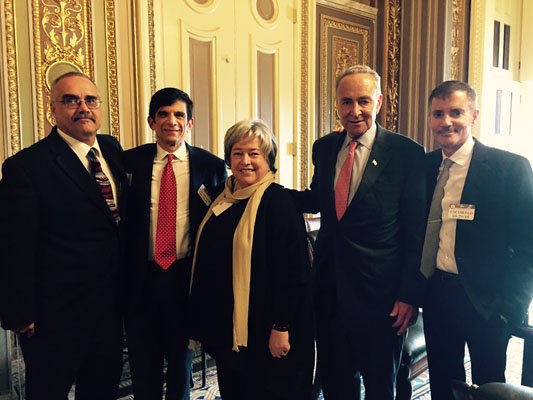 In September 2015, LE&RN Executive Director William Repicci traveled to Washington, DC, with LE&RN Spokesperson Kathy Bates to meet with US Senator Chuck Schumer (NY) as well as members of Senator Kirsten Gillibrand's staff. Shortly after, both Senators became co-signers of the Lymphedema Treatment Act. Senator Schumer then wrote to LE&RN, crediting the organization for its advocacy on behalf of lymphedema and lympahtic disease patients.

“I am a proud sponsor of the Lymphedema Treatment Act," said Senator Schumer. "No one with lymphedema should have to sit and suffer with this disease’s symptoms simply because their primary treatment is not covered by insurance. The Lymphatic Education & Research Network has taken on a great responsibility in promoting awareness of lymphatic disease and I believe Congress and the healthcare system should take their lead. It is the responsibility of Medicare to ensure that American citizens have access to the treatments that work best for them and I am glad to be a part of this push in the right direction.”

Senator Schumer received LE&RN's 2014 Research Leadership Award, accepting the award in person and speaking to a crowd gathered at the Brooklyn Bridge for the 2014 Walk to Fight Lymphedema & Lymphatic Diseases.