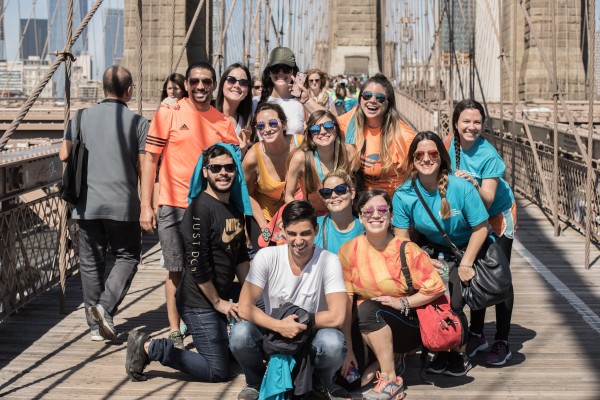 Click here for the online press release and downloadable pdf.

NEW YORK, NY – October 24, 2018 – LE&RN and its New York State Chapter will host the ninth annual New York Run/Walk to Fight Lymphedema & Lymphatic Diseases on Saturday, November 10, in beautiful Prospect Park, Brooklyn, at the Grecian Shelter (The Peristyle.) While this is the ninth annual event, this is the first 5K Run/Walk in New York in support of LE&RN. A shorter one-mile loop around the lake will also be available.

This year’s New York Run/Walk will be a celebration of the recent passage of a historic lymphedema education bill in New York State – the first of its kind in the nation. In recognition of this important advocacy milestone, LE&RN will honor the work and contributions of legislative aides Gus Ipsen (office of NYS Assemblymember Linda B. Rosenthal) and Meg Brown (office of NYS Senator Martin Golden), who were instrumental in navigating the bill through the legislature in Albany.

“This is a very special event,” said William Repicci, LE&RN President and CEO. “The very first Walk to Fight Lymphedema & Lymphatic Diseases was held in New York in 2010. This year, we have joined the State Chapter in hosting our first true New York 5K Run/Walk and we’ll be commemorating LE&RN’s 20th year of fighting LE (lymphedema) and LD (lymphatic disease) through education, research, and advocacy. What began as a local grassroots’ effort has grown to include State as well as International Chapters. World Lymphedema Day®, launched by LE&RN in 2016, has been recognized by governments around the world. At the New York Run/Walk, we are looking forward to seeing advocates who have been there from the beginning as well as brand new activists who share our goal – cures for lymphedema and lymphatic diseases. The New York Chapter can be particularly proud of its accomplishments over the past year, which includes the passage of a lymphedema education bill in New York State.”

Sign up to run or walk in support of the 10 million Americans and 250 million worldwide who are battling this lymphedemic™ at www.LymphWalk.org. Active.com runners can register here.

Registration/check-in is from 8:30 – 9:30 am
The Grecian Shelter is between the F, G and Q trains on Parkside Avenue
Water and snacks will be provided
T-shirts will be provided, on a first come, first served basis.

About LE&RN
Founded in 1998, the Lymphatic Education & Research Network (formerly LRF) is a 501(c)(3) not-for-profit organization whose mission is to fight lymphatic disease and lymphedema through education, research and advocacy. LE&RN provides valuable educational resources for the millions of people who suffer from lymphedema and lymphatic disease. LE&RN fosters and supports research that can deepen the medical community's understanding of the lymphatic system. For more information about lymphatic diseases or the Lymphatic Education & Research Network, please visit www.LymphaticNetwork.org or call (516) 625-9675.

@LymphaticNet: Thank you for making the 2022 #LymphWalk a success! Make a donation today! https://t.co/f8qPhEosHT https://t.co/gRwIk8ElO1

@LymphaticNet: Do you have lymphedema? Take this anonymous survey. It will take 3 minutes, but your participation is extremely im… https://t.co/HuvQgjBd2n