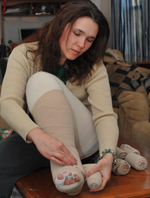 LE&RN's Executive Director William Repecci is a featured writer in the current edition of WestView News, a publication in the West Village, New York City. In "Lymphedema—More Than Just Cancer’s Nasty Little Secret," he talks about the need for national attention to the issue. We have reprinted the article in full below from WestView News.

Ask a breast cancer survivor about her lymphedema and you are likely to hear her say, “It’s worse than my cancer. They cured my cancer. Lymphedema is forever.” However, as familiar as we all are with breast cancer, when you ask someone to tell you everything they know about lymphatic disease and lymphedema, they just scratch their head.

Most Americans know little about these diseases, and that includes medical professionals. Although I had spent decades focused on congenital defects and infectious disease in the US and Africa, I found myself equally as uninformed when I was first asked to head the Lymphatic Education & Research Network (LymphaticNetwork.org). “Clearly, this is a rare disease,” I thought. Spoiler alert! More Americans have lymphedema and lymphatic diseases than AIDS, Parkinson’s disease, multiple sclerosis, muscular dystrophy and Alzheimer’s disease—COMBINED.

Up to 10 million Americans and hundreds of millions worldwide suffer from lymphedema. It will occur in up to 50% of breast cancer survivors, and 100% of those with head and neck cancer. Lymphedema looms for all cancer surgery survivors and that includes prostate, ovarian and melanoma. (Yes, that’s lymphedema one sees in Sen. John McCain’s cheek). Since lymphedema can also be caused by trauma, it is a major issue for our injured military personnel. And there are up to 0.6% of children who are born with debilitating lymphatic diseases. Think of this when you go to see Bradley Cooper portray “The Elephant Man” on Broadway this fall. John Merrick had the lymphatic disease called Proteus syndrome. Finally, recall images you’ve seen of tropical peoples suffering from enormous appendages. They are among the 100 million who suffer from the parasite-borne lymphatic disease called elephantiasis (filariasis).

This leads to three questions: what is lymphedema and lymphatic disease, why is it so unrecognized, and how do we change the landscape of this disease?

Our lymphatic system runs the length of our bodies where lymph, a fluid that maintains body balance, acts as our immune system’s first defense against infection. When lymphatic vessels or lymph nodes are damaged, a chronic, disfiguring and painful accumulation of fluid can occur called lymphedema. Lymphedema commonly affects the arms and legs, often leads to life-threatening deep skin infections called cellulitis, and remains a lifelong functional problem requiring daily treatment. Cancer uses the lymphatic system to metastasize. If we stop cancer metastasis then we’re on our way to beating cancer. Lymphatic research is now shedding light on AIDS, diabetes, heart disease, and rheumatoid arthritis.

Yet, given how important the lymphatic system is, it is notoriously ignored in medical curriculums, leaving doctors often at a loss to both diagnose or treat it. This also leads to lymphedema sufferers who don’t know the name of their disease, and thus are unaware that millions suffer similarly. Since the majority of those in the US who suffer from lymphedema are cancer survivors, there has been a tendency on the part of patients to underplay this side effect from cancer treatment. There is a huge cost to such silence. Lymphedema sufferers report being relentlessly mocked and studies show that they suffer severe psychosocial trauma related to their disease. Silence also leads to little money filtering into research, and even Medicare and Medicaid failing to cover the most basic treatments available.

Compounding the reasons lymphedema has been kept under wraps in this country is the fact that the disease has no “face” on the national stage. Physicians state that they have treated numerous A-List celebrities whose careers have hit brick walls due to the onset of lymphedema. They also say that none will come forward. Although never confirmed by Hillary Clinton, Ed Klein’s 2005 biography The Truth About Hillary makes claim that she suffers from lymphedema due to an “obstetrical infection” after giving birth to Chelsea. The late Ingrid Bergman suffered greatly from lymphedema after cancer treatment. One celebrity on the national stage has broken the silence. Actress Kathy Bates is a breast cancer survivor who recently talked about her lymphedema when interviewed by The Huffington Post.

On September 14th, LE&RN will host its fifth annual Walk for Lymphedema and Lymphatic Diseases. Supporters of lymphatic research and education will gather at Brooklyn’s Cadman Park Plaza before crossing the Brooklyn Bridge on a 5k. Setting up a team is easy. Just visit us at LymphWalk.org. Kathy Bates, if you are reading this, please join us. Likewise the cast of “The Elephant Man.” If you are walking in another event for breast cancer, think of joining us as well. You may very well be looking to us for answers following your cancer treatment. We need to make this a national priority, and that starts with the champions who first step forward to raise much needed awareness.