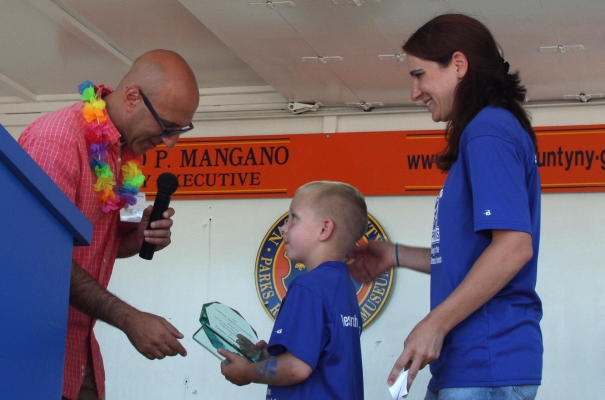 On March 6, 2014, the New York State Legislature will formally adopt two resolutions that were introduced by New York State Assemblymember Linda Rosenthal at LE&RN's request. This is wonderful news.

The first resolution honors LE&RN's Youth Ambassador Connor Looby. Connor was named the first-ever McKenna Shea Johnson Youth Ambassador at the 2013 Walk for Lymphedema & Lymphatic Diseases. While just seven years old, and in spite of complications from a rare lymphatic disease he has coped with since his birth, Connor has amazed all of us with his enthusiasm, committment, and optimism that together we can make a difference for everyone who suffers with these diseases.

Connor began his fundraising and awareness efforts last year, when he and his family and friends formed a team -- Connor's Spartans -- for an obstacle race course in Tuxedo, New York, to raise awareness and funds for lymphatic disease research. This young man, along with his friends and family, continued fundraising for the 2013 Walk for Lymphedema & Lymphatic Diseases and Connor delivered an inspiring year-end message to LE&RN supporters that touched many. This spring, Connor's Spartans will be hosting a Night of Entertainment to benefit the Lymphatic Education & Research Network. Visit Connor's fundraising page for more information on that event and stayed tuned here, and on Facebook and Twitter, for more information.

We could not be more proud that our home state is honoring LE&RN's Youth Ambassador on Lymphedema Awareness Day and we are encouraged that, at last, we are beginning to see public acknowledgement of these diseases which affect so many.

@LymphaticNet: We haven't stopped fighting, and we need your help. https://t.co/7mpCq47Zej https://t.co/djGjumvebI

@LymphaticNet: Dr. Esak Lee, a 2016 LE&amp;RN Fellow, is in the news for lymphedema research. Fellowships and other awards funded by L… https://t.co/4Pmum51uah