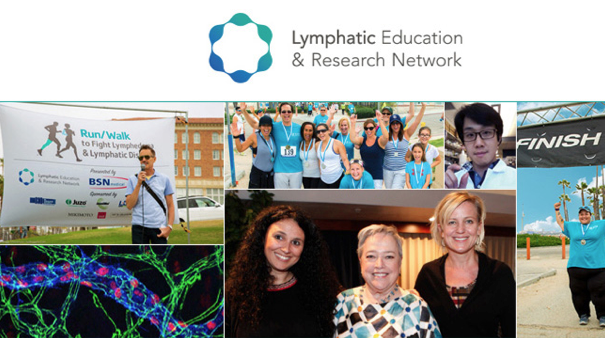 Researcher Sheila Ridner, PhD, RN, called me to say she recently visited a health clinic in rural Kentucky. There on the reception desk was a stack of WebMD magazines with Kathy Bates’ photo on the cover and a headline featuring lymphedema (LE). As she saw visitors leave the clinic with their own copy of the magazine, Sheila took heart in knowing that thanks to Kathy and LE&RN, this scenario was being played out across the country in communities large and small.  This is one reason why you have invested in LE&RN. Here are ten other ways your investment is realizing dividends.

1. LE&RN is collaborating with leaders from Harvard Medical School and Stanford University, and Shoosh Crotzer of Lymphedema Seminars, to present hospital workshops focused on lymphatic medicine. Physicians will receive CME credits for these introductory level courses. Following an initial workshop that is in the planning stages, this is to be promoted to hospitals nationwide. An online version of the coursework is also being developed. Continuing our collaboration with Harvard Medical Schools, LE&RN will again be partnering on the 2018 Harvard Lymphedema Symposium.

2. People with lymphatic diseases need the security of knowing there are medical facilities that are guaranteed to address their treatment needs. Currently, standards for LE&RN Centers of Excellence in Lymphatic Medicine are being drafted by representatives from Stanford, Harvard, University of Chicago, Memorial Sloan Kettering, University of Southern California and MD Anderson/UT Health. A separate oversight committee is ready to finalize those standards for international use.

3. LE&RN is currently collaborating with the American Board of Vascular and Lymphatic Medicine (ABVLM) to develop an expert level certification in lymphatic medicine for physicians.

4. Whereas your company reaches those who know they have a lymphatic disease such as lymphedema, through LE&RN’s Spokespersons Kathy Bates and Steve Guttenberg, we are regularly reaching millions who have likely never heard of LE. Your products reduce suffering, but if a person isn’t aware of their disease, they will not reach out to you for treatment. Through media like Dr. Oz, CBS Sunday Morning, People Magazine, NIH Medline Plus and dozens and dozens of other outlets, LE&RN has advanced the conversation about lymphatic diseases, On April 11th, Kathy Bates, Dr. Stan Rockson and I will be panel guests at the Google campus in California for a "Talk at Google." All Google employees will be invited and the video of the panel will be a permanently available on Google's YouTube channel.

5. LE&RN wrote the bill that was unanimously passed by the US Senate in 2016 establishing World Lymphedema Day™.  Government bodies around the world have since followed suit.

6. LE&RN is in dialogue with the World Health Organization to recognize the impact of not just neglected tropical diseases (NTD), where they currently feel lymphatic issues are encompassed, but to have them recognize that these are only part of the worldwide Lymphedemic™, which includes non-tropical related diseases of primary and secondary LE, lipedema, and the myriad of hereditary and genetic lymphatic diseases.

7. With LE&RN Chapters now across the world, we are making our cause a global priority. In addition to an ever-growing number of US State Chapters, they are developing in places as diverse as Malaysia, Nepal and Egypt to New Zealand, Europe and Sudan. On May 12th, LE&RN's Washington DC/Northern VA Chapter will host their first Run/Walk, which will kick off from the steps of the Lincoln Memorial.

8. And when it comes to addressing obstacles to the global conversation about LE, LE&RN is there as well. Many of you now share LE&RN’s messaging, whether by emphasizing that lymphedema is a disease, using the acronym LE, or by stating in your materials the host of other well-known diseases whose patient numbers are far fewer than those affected by LE and other lymphatic diseases.

9. Since there is no official international lymphatic disease hotline, LE&RN is called upon daily to address patient requests for help.  Whether it is a child in Mexico seeking treatment in the US, a person in rural Arkansas unable to find a diagnosis or treatment, or a woman with LE in Sudan that we connect with US therapists willing to offer remote training to local clinicians, we accept every call and endeavor to address the needs at hand.

10. Investing in LE&RN means your executives and marketing heads are visionary and see the broader picture. Yes, as a sponsor of LE&RN you will see immediate results with your logos emblazoned on websites, social media, banners and on t-shirts celebrating our ever-growing number of Run/Walks across the country. You will have your name on every one of the Livestream symposiums reaching tens of thousands annually. And therapists, physicians and potential customers are able to search the services and videos of LE&RN sponsors who participate in our Virtual Expo.

These are just a few reasons why you have made a wise investment in your company’s financial health by investing in LE&RN. At the same time, you have made an equally important humanitarian commitment to those living with lymphatic diseases.

Thank you for your trust. We take this very seriously and we are honored to keep our worldwide membership aware of the role you have chosen to play in their journey to good health.

@LymphaticNet: For the past three years, Lisa McPartland has organized “Light it up for Lymphedema” for the New York State Chapter… https://t.co/LFCNyopITv