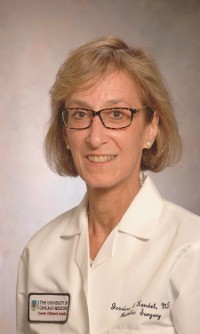 Jessica Kandel is the Surgeon-in-Chief, at The University of Chicago Medicine Comer Children's Hospital, Professor of Surgery and Chief, Section of Pediatric Surgery, and the Vice-Chair for Pediatric Surgical Services (appointed August 1, 2013).

Kandel graduated Summa Cum Laude from Yale University in 1981, and completed her MD degree at Columbia University in 1985. She then went on to a General Surgery residency at the Massachusetts General Hospital in Boston (1986–1993). During her residency, Kandel completed a two-year surgical research fellowship with Dr. Judah Folkman at the Boston Children's Hospital, investigating mechanisms of tumor angiogenesis (new blood vessel development that "feeds" tumors). Kandel joined Columbia University in 1995, becoming the Director of the Charles Edison Laboratory for Pediatric Surgical Research in 2000 and, in 2001, co-organized the first Columbia University Arden House Symposium on Angiogenesis. She cofounded the Columbia University Vascular Anomalies Group in 1998, which became a leading resource in the New York City area.

Upon her recruitment to the University of Chicago in 2013, she organized the Vascular Anomalies Group at that institution, https://surgery.uchicago.edu/specialties/pediatric/csp/vascularanomalies/, which has similarly become a resource for patients and families in Chicago.

Kandel has recently developed a novel mouse model of lymphatic malformations, with her coinvestigator, Dr. Carrie Shawber. Combining her basic science research interest and clinical expertise, she seeks to advance the care of patients with lymphatic disorders using the molecular insights derived from this new line of research.