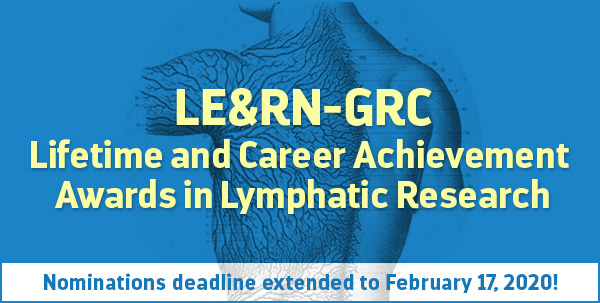 The LE&RN-GRC Lifetime and Career Achievement Awards in Lymphatic Research are given in the name of Wendy Chaite, Founder and Dr. Stanley G.  Rockson, Founding Chair of LE&RN’s Scientific and Medical Advisory Council, and presented every two years at the Gordon Research Conference, Lymphatics.

The LE&RN-GRC Lifetime and Career Achievement Awards in Lymphatic Research are intended to recognize those individuals who have made a significant contribution to the promotion and support of lymphatic research, to advancing lymphatic research and/or finding improved treatments and cures for lymphatic diseases, lymphedema, lipedema, and related disorders.

Nominations should detail the candidates' overall scientific, medical, and service contributions to lymphatics.

Submit nominations to LERN@LymphaticNetwork.org by February 17, 2020. Submissions should include:

Sign up for e-news
Resource Downloads
Ask the Experts

Click here to submit your question, and a lymphatic disease expert will answer it!

Get help and support from a local lymphatic disease community near you!

Find a walk near you to join a community, increase awareness, and to raise much needed funds.