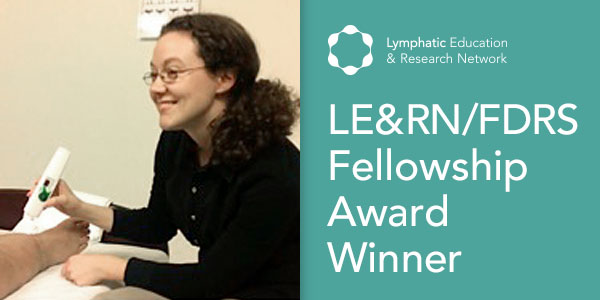 Rachelle Crescenzi, PhD, a Postdoctoral Research Fellow at Vanderbilt University Institute of Imaging Science in the Department of Radiology at the Vanderbilt University Medical Center, under the supervision of Dr. Manus Donahue, received an LE&RN research fellowship in March 2016. We asked Dr. Crescenzi to tell LE&RN Supporting Members more about her research.

What is the focus of your research?
If “a picture is worth a thousand words,” then a picture that can measure something is worth a thousand answers. This is the motto that drives my research in imaging science using magnetic resonance imaging (MRI). For the past six years my research has focused on developing noninvasive MRI techniques that have greater sensitivity to things like protein and metabolite content than conventional MRI signal. I have used these methods to explore early metabolic changes in the diseased brain before structural changes are recognized. My current postdoc research focuses on adapting these molecular MRI methods available for neuroimaging to the periphery to target the lymphatic system. One such interesting molecular target is the osmolyte sodium, which has a natural magnetic signal that can be exploited without additional contrast agent, and measured quantitatively at high spatial resolution in the human body. We usually think of imaging water with MRI, but sodium is just as physiologically relevant and clinically accessible.

What do you hope to learn from this research?
By developing experimental tools to directly measure sodium and lymphatic function in patients, I am seeking to explore principal questions about an understudied disease lipedema. Outwardly, women with lipedema can appear similar to obese women or those with lymphedema of the legs, and perhaps for years have been told by their healthcare providers to diet and exercise more. Yet there must be something fundamentally different in the working of their lymphatic system and adipose metabolism, because diet, exercise and gastric bypass surgery does not have an impact on the lower portion of their body, and strikingly their leg swelling does not involve the feet. These patients also exhibit a superficial and palpable difference in skin texture that is often associated with a painful sensation to touch. We may be able to measure this difference in terms of impaired lymphatic flow, and subsequent differences in tissue composition, namely interstitial protein levels and sodium concentration, but we must aim internally. The imaging methods I develop in this research project will hopefully inform on the impact of lymphatic impairment on tissue homeostasis in patients with lipedema. For instance, is the condition driven by local pathology, or is it a systemic metabolic disorder that manifests locally? What is the role of the skin in regulating the lymphatic system?

What impact do you foresee this research having on our current body of knowledge?
Components of the lymphatic system have now been discovered in every major organ system of the body, and yet a comparative lack of imaging tools exist to visualize the lymphatics in vivo and quantify its physiology. Specific measurement of tissue sodium concentration may aid our understanding of the role of sodium in regulating inflammation and interstitial volume, for instance. Further, the potential interaction between sodium and lymphatics, as well as the storage of sodium in tissues, represent unexplored pathways that could shift our current concept of how osmotic gradients function in the body.

What clinical implications might grow out of this research?
The magnitude of need for clinical justification of women suffering from lipedema compared to the lack of diagnostics to deeply evaluate their phenotype is incredible. Lipedema is a condition that can arise as early as puberty and continues chronically, representing a great need for intervention at every stage of a woman’s lifecycle. In my estimation we need tools for diagnosing the disease and for screening and monitoring symptoms in order to provide individualized patient care. Towards this goal I am comparing imaging metrics with several biophysics measures (tissue dielectric and bioimpedance spectroscopy) using devices that can be easily applied externally in the clinic and may help differentiate lymphedema from lipedema.

What might the field accomplish within the next few years?
The immediate need in the field of lipedema research is for a differential diagnosis from lymphedema and obesity that will characterize the phenotype internally. Thereafter, molecular and functional MRI measures of lymphatic physiology will allow the field to test hypotheses in vivo regarding the pathophysiology of lipedema and its response to therapies, in order to aid physicians in more appropriate treatment of lipedema. In the meantime, I hope these methods will be used to explore lymphatic function in the body, adipose tissue metabolism, and sodium as a relevant player