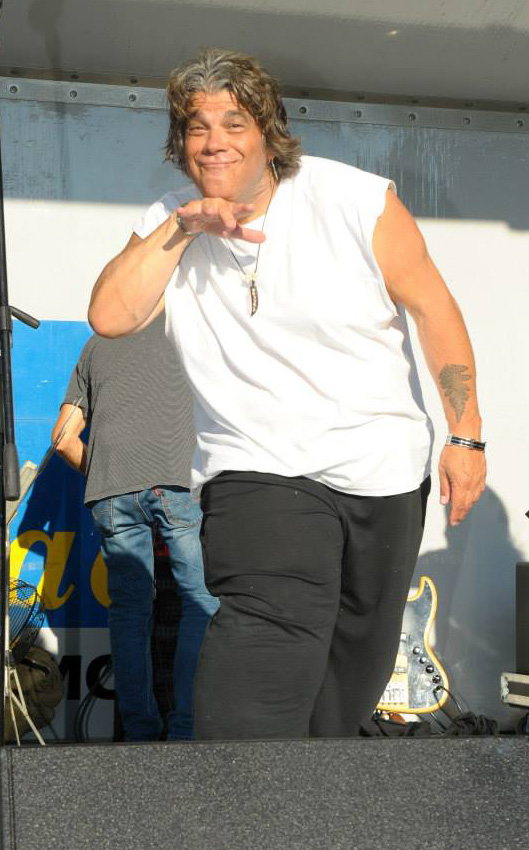 Daniel and I were married the tragic week of September 11 (on the 16th). Two years later, his diabetic older sister was undergoing dialysis several times a week and was in need of a kidney. The selfless person he is, he went to the doctor to find out if he could be a match. He was willing to give up one of his kidneys for her. The tests revealed a problem, and he was told he was therefore not a candidate and that he needed to seek his own treatment for this potentially life-threatening problem.

The remedy was to be one year of self-injecting Interferon. If all went as planned, this would eradicate the problem completely. Over the course of the year, Daniel would inject the drug into his upper right thigh. It was always bruised. The injections made him lethargic and greatly affected his short-term memory. He thought he would lose his hair, so he went to our hair stylist and cut his thick, long, wavy locks off and came home with an-almost crew cut.

We, as a couple, spend our weekends dining out and listening to live music performances. He did his best to not skip a beat in our entertainment activities. After the year of treatments, testing revealed that the medical issue had been eliminated. To celebrate, he decided we should go to an island. In 2004, we took a trip to Barbados. Looking at the photos now, I can see the first sign of lymphedema creeping into his right leg. The day after we returned, Daniel had an extremely high fever and was shaking uncontrollably. He was never one to really get the flu or even a cold. He was admitted into the hospital, and they couldn’t figure out what was wrong but noticed minor swelling in his right calf area. Immediately they thought there was a circulation issue and performed numerous tests to find out that the circulation was fine.

The fever was brought down, and we went home, and the next day he seemed to be close to his normal self. He made appointments with different doctors to find out why the leg was swollen and red/fevered. The assumption, because we just returned from an island, was that he was bitten by an insect. Malaria was even mentioned. Nothing was conclusive. Finally, a G.P. he started seeing recognized that he had injected Interferon, asked where, and stated that it was likely something called “lymphedema.” Of course we had never heard of this, but it made sense that the drug also damaged the lymph nodes in the limb where he was injecting. The doctor stated he was lucky it was only in one leg.

At this point it wasn’t too prohibitive, just uncomfortable, so I began to seek out online discussions about this condition, and the same thing kept showing up: There is no cure. I hired a personal trainer for Daniel, thinking that if he lost a little weight and kept fluids moving in the leg, it might stabilize the symptoms. It really just brought on pain. Subsequently, approximately once a month, that horrible fever and shaking would reoccur for a day. He would be confined to bed like a severe flu and just drank lots of Gatorade. During these “periods,” he would have to urinate very frequently. Logically, we thought the body was dispelling these toxic fluids building in his leg. The skin would be hot to the touch and pliable. You could press on it, and it would leave an indentation. The day after these “periods,” the swelling would go down slightly. I went to the vitamin store and purchased butcher’s broom pills to act as a diuretic, but as he said, “All it does is make me pee every ten minutes.”

None of the doctors he had mentioned this to could draw any connection to the lymphedema. Some would say if it goes away after a few hours then don’t worry about it. Some recommended to go to the hospital immediately when it occurs for fear of cellulitis. He wasn’t going to do that once a month. He just toughed it out, all the while, not letting on to any outsiders what was occurring.

I found a doctor in New York City, who had dealt with some lymphedema cases. He gave Daniel the pump machine to use, but by now, Daniel was jaded and not hopeful because everything was a “band aid.” When he would use the machine, which moved the fluids up, he would then get the fever and shakes again, so he stopped using it. In addition, this doctor was not on our insurance plan, so it was not an affordable option. Last year, we decided to visit Kessler Rehab Center in West Orange, NJ. The physical therapist was licensed in lymphedema massage. She recommended he come three times a week and be wrapped in many types of compression. This became very costly and caused him pain just to have the compression. He was unable to keep the wraps on while working, and he needed to work.

Every year the leg would get a little bigger, and the swelling was no longer confined to his calf area. The ankle, the toes, around the knee and eventually the thigh, all had the edema. Now it was debilitating. He was a bartender – on his feet for many hours – and would come home in much pain. Bending the leg to get in and out of his vehicle became a challenge, bending it to go up stairs was a task and lifting it into the shower always took a few attempts, but nobody heard him complain. I could see it taking the emotional toll on him though. There were many things he and we could no longer do…something as simple as a scenic walk. He loved the beach and the ocean, but he stopped wearing shorts, stopped being able to dress up as he always did, because nothing fit his leg. He was limited to black sneakers two sizes larger, black stretch sweat pants, and a pair of over-sized black slacks.

Every year, though, when spring arrived, he would be in our yard tending to the gardens with me. The thing he was most passionate about was music. In the last few years, he was a percussionist with the band Fillet of Soul …standing all evening. While he was ready to collapse by the end of the night packing up his equipment, playing brought him much joy. He sometimes expressed to me that he wished his leg could just be removed.
Other than the lymphedema, Daniel was a seemingly healthy guy of 61. Nobody ever believed his age. He ate healthy for the most part, he was strong as an ox, and had great endurance for physical labor. On March 17, 2016, Daniel collapsed and passed away unexpectedly. They deemed it cardiac arrest. I imagine the weight and pain of his leg did not help, causing a constant strain, but I don’t think there was a direct cause and effect.