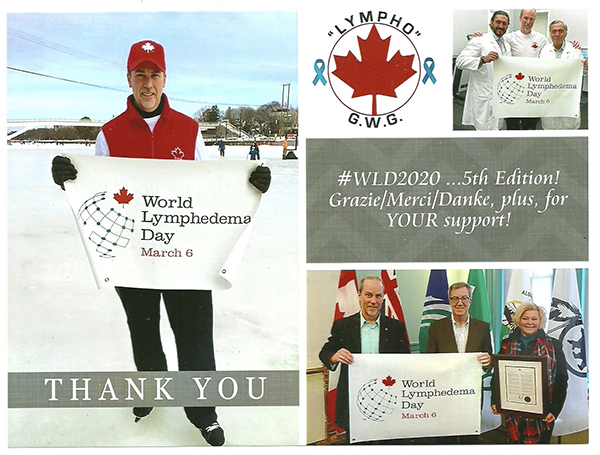 “Jamais deux sans trois” (from the French, figuratively translated to “good things come in threes”). Three (trois) truly is the central number to this blog.

Second, for WLD2020, a domestic sequel-campaign was launched as “A Capital (& Regal) Idea!”, which sought attention plus recognition for the “Lymphedema Community” members who call Canada “home”.  Because Canada remains a constitutional monarchy, the Crown is Canada’s Head of State. Canada’s Vice Regal is our embodiment of the Queen (of Canada) … so, the WLD2020 campaign extends to the Regal presence in Canada, i.e. the Governor General plus the ten Lieutenant Governors.

Third, an ambitious international sequel-campaign has been attempted: “A Capital Idea - Extended+” had as its goal to take a *good* idea and make it even *gr8er* by calling for supportive “gestures” from nine other foreign “Capital City” leaders from, alphabetically – Australia, Austria, France, Germany, Greece, Ireland, Italy, U.K., & U.S.  “Gestures” in this sense focused requests to the “Capital City” mayors for a public statement expressing support (proclamation) and/or illumination of a significant landmark, ideally in teal, the colour often associated with the LE Community. Time will tell whether and/or to what extent the WLD2020 campaigns materialize – engagement & outreach for enlisted assistance from on-the-ground community supporters was also undertaken with an intent to favourably increase the chances of success.

Once the idea of launching these three initiatives was borne, three apt quotes were selected to reinforce the thinking behind them, as follows:

With a view to action, education & evaluation, one might ask the two-fold question of “why now” & “why me” when assessing what one might DO to recognize WLD2020 by supporting “the cause” … the fight (war) vs. LE.

To be clear, any/all advocacy efforts are helpful & beneficial, including for the advocate himself or herself. Witness the sea of “Lymphie” types of female advocates & activists that abound on social media platforms. But what of the “Lympho” male afflictees. If this fight is truly to be comprehensive & inclusive, this second, relatively untapped source needs the “AIM” nudge… yes, another reference to a beneficial trifecta applies. The trifecta is aspiration, inspiration & motivation.

The “Lympho” population needs to get a sense of: *aspiration* (what do WE want or need to be / become); *inspiration* (maybe ‘functionality over fashion’ could be the declared niche for the male voice in the choir of “Lymphedema Community” cries); plus, *motivation* ... no one is going to do the work & investment of time / effort for you (us). While *motivation* has never been lacking for LymphoGWG, neither has *aspiration*, but it appears that others seem soley fixated on the *inspiration* component of this trifecta. Whatever you seek or need & in which ever order of the three “IMA”, “AIM”, or “MIA”, we all need to participate in this fight vs. LE... “the cause”. The other meaning of “MIA” is not helpful for our cause, i.e. ‘missing in action’.

So, to close, I cite a long-standing maxim of mine, which is to “think like one of action & act like one of thought”, but do both, i.e. ACT & THINK. Then, bear in mind the earlier quote from yesteryear about the linkage between action & happiness (see Disraeli). In my case, as LE&RN: Canada Chapter, Chair, I am happy to have acted on behalf of “the cause” for well-intentioned & supportive efforts and/or gestures** in Canada ... & beyond, including America & Italy (the “Cradle of Lymphology”).

As always, comments, ideas, feedback are encouraged & welcomed at:

Lest anyone be shy, nervous or hesitant about the foray into the art of the possible for “gestures”, I hasten to add that rejection or denial will occur, but this is not failure. Failure would be assigned more to apathy & outright resignation that where LE is concerned, “things could be worse” so we should just silently “live with it”.

Post-script (regarding the theme of “three”): the central launch goals of the initial LE&RN International Chapter, LE&RN - Canada Chapter , were 1/ establishment of WLD, 2/ global standardization of LE, plus, 3/ achievement of a WHO-designated/dedicated WHD-LE! In other words: action, action, & action. Adding to the so far unmet gauntlet challenge from WLD2019 to the U.S. domestic chapters of LE&RN (Americanization of “A Capital Idea!”, stateside), another challenge is issued to any heretofore #spectators in the Community – what will YOU do for #WLD2020! If 3 is *not* your number, maybe 5 is… as in the 5th edition of THE day (OUR day) on the annual calendar of the global LE Community!