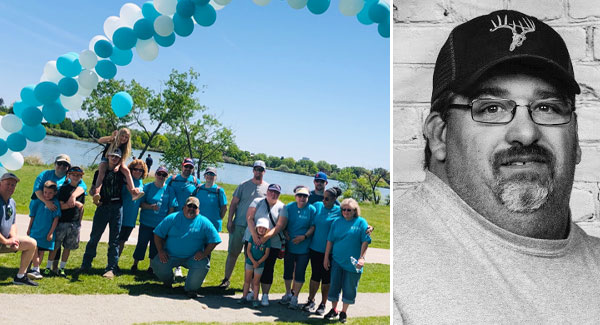 My dad has lymphedema (LE), I have lymphedema and my son has lymphedema. Our family has had to deal with and has been affected by this disease now for three generations. I’ve had countless doctor’s appointments, hospitalizations and trials of different medications.

As a young child, I never really knew what was wrong with my legs. I just knew that they didn’t look like all the other kids in school. I never let it slow me down, I would play sports just like the other kids. At that age my lymphedema was never a big deal. I lived a very active life playing soccer, football and baseball. When I was twelve years old, I had a dirt bike crash that sent me to the hospital. When I got there, a fever spiked along with chills almost immediately. It became a race to find out what was the cause of these sudden symptoms. After that they started to look more at my LE. As time passed more bloodwork came back and my leg was beginning to get a bright red color to it. It was obvious that it was an infection. Now with the research about LE and knowing that something changes around the great awkward stage of puberty it was just a matter of time that I would have gotten an infection. I had just sped things up with the dirt bike crash and because of the warts on my feet.

After I was released from the hospital, I had a ton of follow up appointments. As more doctor visits happened it was clear that not a lot was known about lymphedema. As time went on, I would continue to get infections. I could find a crack or open wound in the infected area. The more it happened the more we knew what was going to be asked and had every answer for the doctors including what medications worked for this type of infection and what meds I needed to be on. The older I got I knew that not much had changed in the research about LE. I felt like a broken record playing the same song over and over to every new doctor I would come in contact with. Even with all of this going on in my life LE didn’t slow me down unless I had an infection. As an early teen I remember how hard it was for me to look at other kids and think how easy they had it.  With every hospital stay it never got any easier. Some hospital stays were so bad that I would find myself in the ICU with a blood infection. With every hospitalization the doctors still didn’t have any new information, treatment or preventative assistance. The year after graduating college was one of the worst years of my life. It felt like every time I opened my eyes I was going to the hospital for treatment. At this point my doctor had put me on a water pill and had me coming in for a long-lasting penicillin shot. Shortly after trying that and having no luck, it was time to make a trip to the Mayo Clinic because they had a lymphedema specialist and maybe we could get the answers we needed to help manage my LE. We made the trip to the Mayo Clinic in Minnesota and after a full week of seeing many doctors we had found out that the only new treatment for LE was manual lymph massage. The kicker was that we didn’t know of anyone in Colorado that could do this type of massage. Upon leaving the Mayo Clinic a little down and spent with seeing so many different doctors, it was clear that I knew so much more about LE that I could have been a Lymphedema Specialist! When we got back home things didn’t change.  Same old story; infections, hospital stays, and back to somewhat of a normal life.  After a few days in the hospital we had found a person in Boulder that did the lymph massage. Right after I was released, we went straight to her office and got the process to receive lymph massage started. We started with wraps and finally got my legs to a point that I was able to have some support stockings made for me.  At this time, we thought we had finally found the answer to my LE. Unfortunately, we found out that it wasn’t the cure we were hoping for. I started to get depressed with all the work, doctor’s visits, and money we had spent and still ending up right back in the hospital. At this point in my life I felt like my dad and I had to be the only people in Colorado with Lymphedema and this was just how my life was going to be.

In July of 2012 I married the woman of my dreams. We both wanted to have kids but I didn’t want to have a child with LE, so before we got married, we decided to get the ball rolling and had some genetic testing done to see what the chances were of passing my LE to our kids. After the tests came back we got somewhat of an answer and we decided to see what would happen. In the early part of 2013, we found out that my wife Emily was pregnant with a little girl. Every day of the pregnancy I wanted to know if my baby girl was going to have LE. The morning of August 3, 2013 Emily went into labor and it was time to meet our baby girl Avery Paige Sanger. Little did we know at that time we would be getting a big surprise. As Avery was born and finally being cleaned off, we got the surprise that the little girl we thought we were going to have as actually a boy. So right away we changed the name to Hunter Jace Sanger. As he was getting passed around, a nurse put him on a table to take his vitals. As she got down to his feet, a concerned look came over her face and I knew right away what it was she was looking at. I got up from my seat next to Emily and went to have a look and tell the nurse what she was seeing probably for the first time. After we were released to go home, we made an appointment with Children’s Hospital to get it on paper that Hunter did in fact have LE. After Hunter was born, I had a few trips to the hospital for a leg infection. It was hard to be in the hospital away from my wife and son. I had dealt with some depression before from being in the hospital, but now having a family it was even harder. The worst part of the depression was knowing that at some point in Hunter's life he was going to be the person in the hospital bed and not me.

One day Emily came home and she had found out that Colorado was going to have its first Walk to Fight Lymphedema and Lymphatic Diseases. We had less than a week to get ready and get my family and support team signed up and ready to walk as The Super Sangers. As the day of the first annual walk came, I wasn’t sure what to expect. As we got to where the starting area was, for the first time, I was able to see with my own eyes that I was now not alone in my battle with LE. It was hard to open up to anyone at the Walk at first because of my insecurities. I was self-conscious about my body. As the walk started I wasn’t sure how I should feel about meeting and seeing people just like me. As I got partially around the lake, I met up with Angela and Marie (the Co-Chairs of the Colorado LE&RN Chapter) and started a conversation with them. While Angela went ahead and some of my family had fallen back, I walked along with Marie. In that short time of walking with Marie and Angela, I knew I had found my Lymphedema Family. After the Run/Walk it was nice to know that now Hunter has a very special group of people he can talk to and get the help that he will inevitably need later in life. Time flew by and before I knew it the 2nd Annual Run/Walk was right around the corner. We got our group together and showed up ready this time. To my surprise, Angela and Marie honored me by asking if I would cut the ribbon to kick off the walk. But that year my body told me that there was no way I could do the walk and I had to sit it out. For the 3rd Annual Run/Walk my company became a local sponsor and that’s when Angela said that I was now a part of LE&RN. I knew I had found a place that I was meant to be and asked if I could be more involved to help others. Angela and Marie then invited me to Co-Chair the Colorado Chapter of LE&RN as they wanted male representation. I have to say that LE&RN has lit a fire in me that I had thought was put out a long time ago with this disease. This chapter has led me to meet some of the best people in the world and has pushed me to be more open about the disease. It also gives me peace of mind to think that my son isn’t going to have some of the same problems I had growing up with this disease. I’m looking forward to making the 4th annual Run/Walk to Fight LE and LD bigger and better than last year.