Beth Boyd, RN, is Chair of the American Society of Breast Surgeons Foundation. She is shown below with LE&RN Honorary Board Member Steve Guttenberg after receiving the LE&RN Impact Award for her efforts to educate surgeons about the realities of lymphedema after surgery and the need for early surveillance of the disease. Visit the Foundation’s website at breast360.org.

Can you tell us a little about what the ASBrS Foundation does?

The Foundation is an extension of the American Society of Breast Surgeons. We support the Society in their efforts but go further as we’re the patient advocacy arm of it. Our mission is to advance breast care and enhance the patient experience. We want patients to be educated enough to be involved in their care, so they can make informed decisions with their physicians. Our website is a very robust source of information for patients. 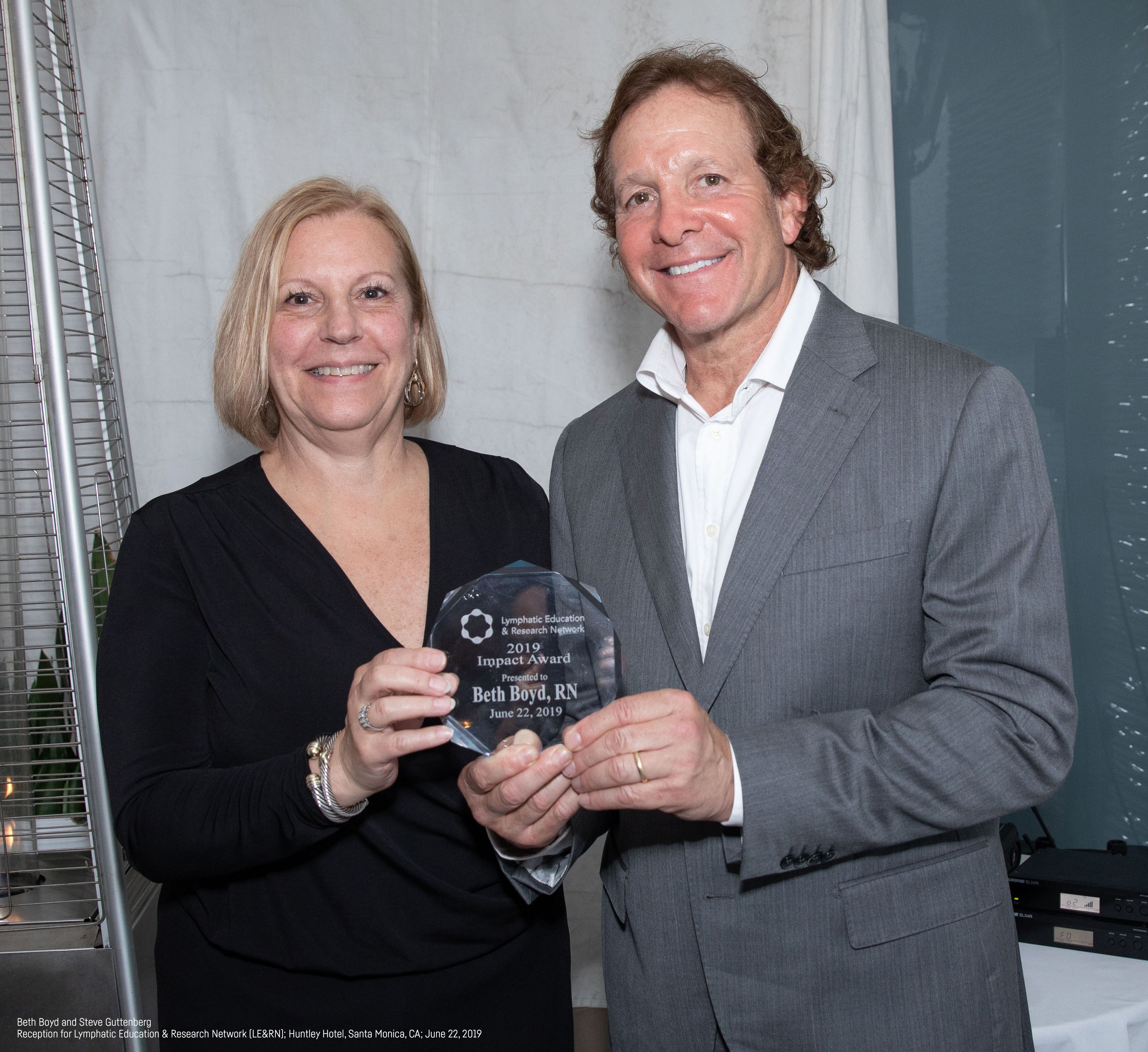 How did it come about that you attended the Harvard Symposium last November?

Our Executive Director reached out to Bill (Repicci, CEO and President of LE&RN) to try to make an alliance with LE&RN. Lymphedema (LE) is a huge problem for many breast cancer patients and we thought it would be a good fit. And we were actually doing an event in Boston at the time. For myself, it was an eye-opening experience. I knew a little about LE&RN, but it was just intriguing to sit there and listen to the stories of actual patients. I was so used to the clinician side of things. I’m very happy I was there, and it inspired me to continue a relationship with LE&RN.

You attended LE&RN’s Lobby Days and Rally in DC as well.

Our walking team for the Rally consisted of myself, one board member, and four other therapists. I also joined the lobbying effort the day before, which I was so honored to be part of. Hopefully next year we’ll have a bigger team and bigger representation. It makes you feel so good to be able to have the voice of all people with LE heard. It was a very emotional experience for me. In addition, I met Kathy Bates there and extended the Foundation’s invitation to have her keynote the ASBrS conference in Dallas this past May.

What fueled your interest in lymphedema?

My mother died of colon cancer when I was ten years old. It had a huge impact on me and I wanted to be a nurse forever. I went through school, worked as an OR nurse, then worked in Atlanta with a breast surgeon, Dr. Richard Fine, who connected me with everything I do now. I started with him in 1990 and we’re still working together. My focus has always been what’s best for the patient. My staff was always told that you may be having a bad day, but your patient is having a worse one. LE has stood out to me recently, partly due to some work I did with Dr. Stan Rockson at Impedimed. I realized how little we’re doing for LE. Early detection is so, so critical and that’s what we’re lacking. While we’re trying to find a cure—or at least some relief for LE patients—I want to concentrate on preventing more cases of LE to begin with. That can only be done with early detection and early treatment. In my mind bioimpedence is very exciting. It can actually detect any fluid changes before a person is symptomatic, providing an opportunity to reverse LE in a lot of cases. That’s a critical part of today’s medical practice that we’re missing.

In the field of breast cancer surgery, what is the current level of focus on lymphedema?

I think it’s much higher after Kathy’s powerful keynote speech to us back in May! I work with these physicians and do the physician education before these meetings, so I talk to a lot of them. There are some who are very informed about bioimpedence and early detection, but I would say in general it’s not very many. They know the word lymphedema and know what it is, but I don’t think they feel like it’s their concern. They’re worried about the cancer, which is critical, and LE is something that may or may not happen. However, after Kathy’s address—and I had the privilege of introducing Bill who introduced her—I had more people come up to me and tell me how affected they were by it and how it would definitely change their practice.

What future ambitions does the Society have to promote early detection and treatment of lymphedema among breast cancer surgeons?

Every year before the Society’s annual meeting, we have what we call pre-meeting courses that cover different procedures. This year—for the first time—we had one in lymphatics. It focused on the treatment side of people who already have LE or have a great risk of acquiring it, but I would like to focus on pre-screening as well. In addition, I would like to work with different organizations to get their guidelines aligned with regards to early detection. That way we would all be working with the same standards. I’ve also talked to some of the industry that would support us financially, though it’s not going to be an overnight thing. I’m working hard but it’s a process.

Every patient that we can help is that one more. There are positive things going on out there that need to be brought to the forefront. I can’t even imagine having LE and these people need some hope. LE&RN has done such a phenomenal job. We had a patient event after the Dallas meeting and I basically stood up and said, “You’ve got to check out LE&RN.” I truly meant it. I think what you’re doing for these patients is great. We’re making excellent progress and doing a good job treating cancer these days. People are living longer and surviving. So now let’s focus on LE. I think it’s time.