Dr. S. R. Narahari, MD, DVD, is head of the Institute of Applied Dermatology, a clinic based in Kasaragod, Kerala, India. From January 14–17, 2019, the Institute hosted the 9th annual Colloquium on Evidence-Based Integrative Medicine for Lymphatic Filariasis and other Chronic Dermatoses. (LE&RN CEO, William Repicci, and Scientific Board Member, Professor Peter Mortimer, were speakers at the Colloquium.) Known as a “people’s doctor,” we had a chance to sit down with Dr. Narahari and ask him a few questions. 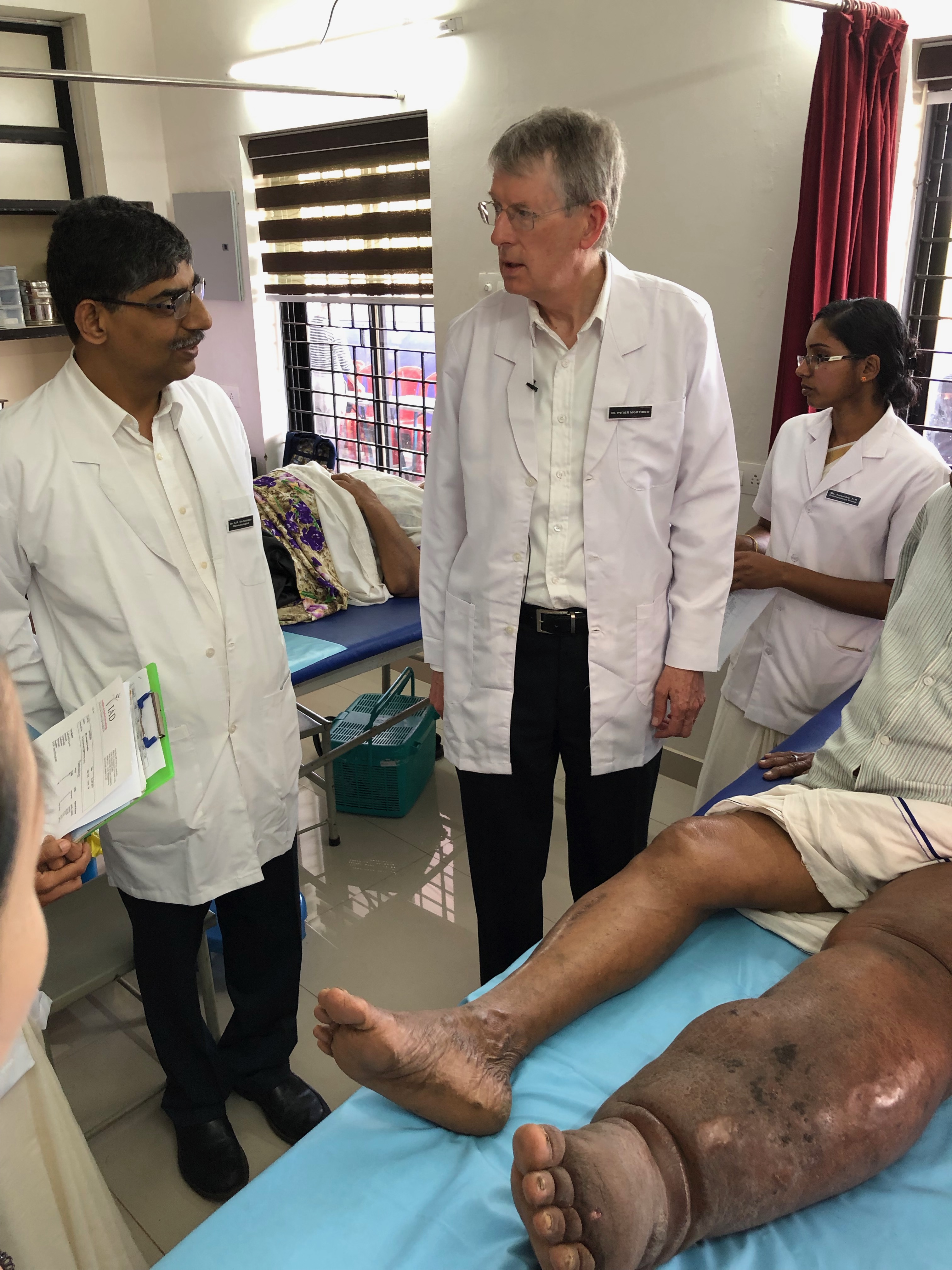 Tell us a little about yourself, doctor.

I was born in a place called Puttur, in the state of Karnataka. My father was a lawyer and my mother was an agriculturist. When I was growing up, being a lawyer was very prestigious in India because they earned well. Then the trend became medicine and I opted for that. I was the first doctor in the family and now my youngest son is the eleventh doctor in the family.

What drew you to treating lymphedema and filariasis?

Because I am a dermatologist and here in Kasaragod there’s an epidemic of filariasis! Patients with the disease first came to me and we started to develop a method of integrated medicine to treat their chronic symptoms. In 2002 the World Congress of Ayurveda held their meeting in Cochin and they invited many people from the west. That’s where I met Dr. Terence Ryan, who was already trying to push a lymphedema program in India. Dr. Ryan was also thinking that yoga and Ayurveda would work for lymphedema and had published a paper to that effect by then. He gave me that paper and said since you’re working with this, why don’t you try it? I tried it on one patient in 2003 after taking guidance from Dr. Ryan and it worked. Later on, Dr. Ryan took me to Germany and had me present the case to the International Society of Lymphologists. Seventeen experts spoke from the floor after our presentation, which is a very rare kind of response at any conference. I realized there was something in this. In 2005 we held the first colloquium here in Kasaragod after treating 55 patients and then we slowly built the organization.

Since your main focus at the clinic is on Lymphatic Filariasis, can you please explain what that is for our readers?

LF is caused by a microscopic worm that spreads from person to person by the bite of an infected mosquito. The worms pass from the mosquito through the skin, travel to the lymph vessels, and grow into adults. The adult worms then release millions of microscopic eggs—called microfilariae—into the blood. The microfilaria damages the lymph nodes and lymphatic vessel, impairing the flow of lymph fluid and causing massive lymphedema (elephantiasis) of the legs, arms, breast, and genital areas. 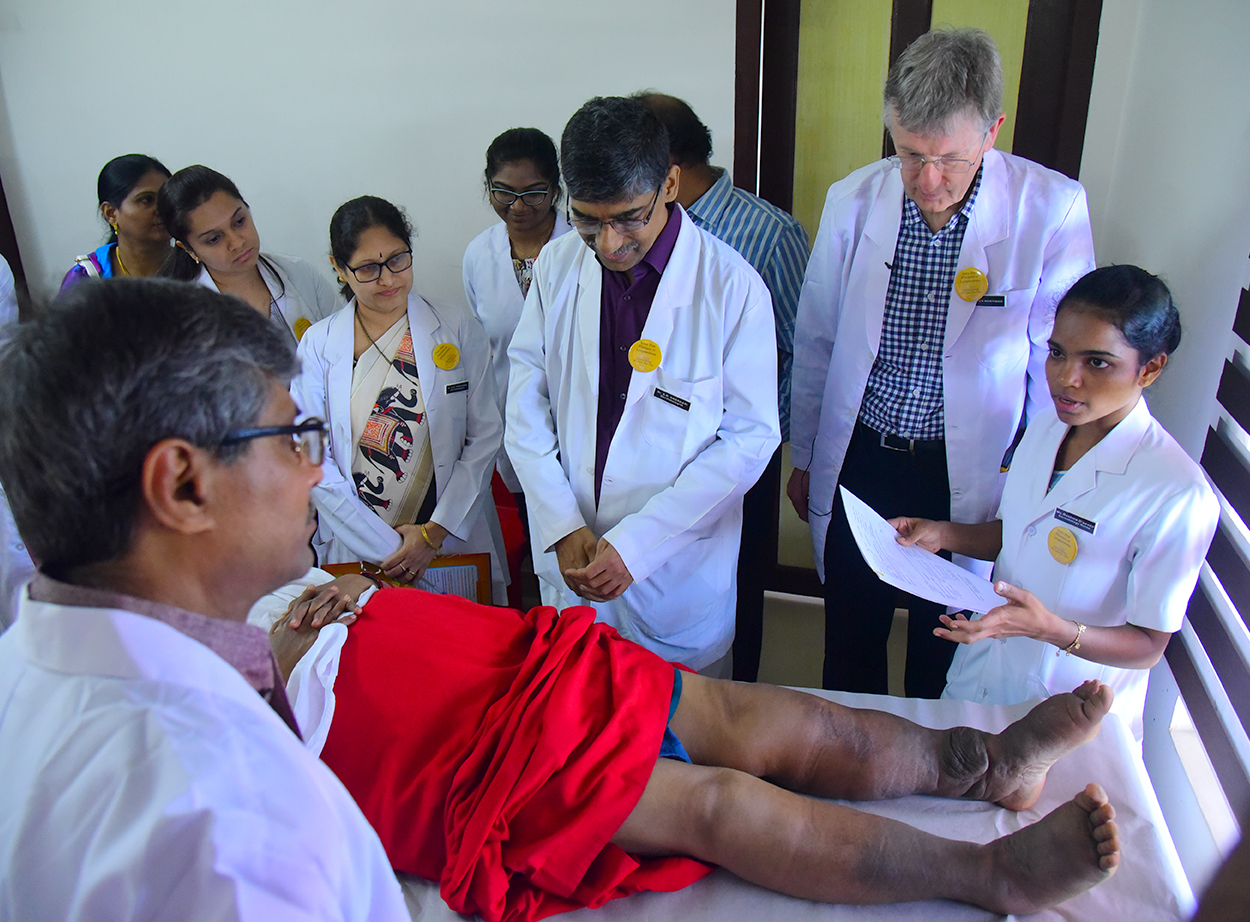 What obstacles do you face treating people with filariasis in India?

Number one: the fact that most Indian doctors think that there’s no treatment for lymphedema. That’s why we invented one here. Number two: our doctors are focused on acute care and infection control because the population is so large that they make enough money from that to subsist. In the Indian healthcare sector, 80% of doctors are private. Number three is that the number of doctors in this country is very low compared to the USA. We need at least 100% more doctors in India for the population. As a result, every clinic is very crowded, and doctors have no time to focus on chronic care. There are hardly any therapists in India for lymphedema. There might be 200 therapists who focus exclusively on lymphedema. So, there’s very little expertise out there.

In addition, we are not lobbyists. While we have eighteen years’ worth of solid data and research on about 3,500 of our patients, and we are published, we don’t have the money or time to “please” the lobbyists. Thus, we are blunted in our attempts to get recognition. Our attitude is a problem for the people who have the money and make the policies. They want “yes” men. We are not yes men. 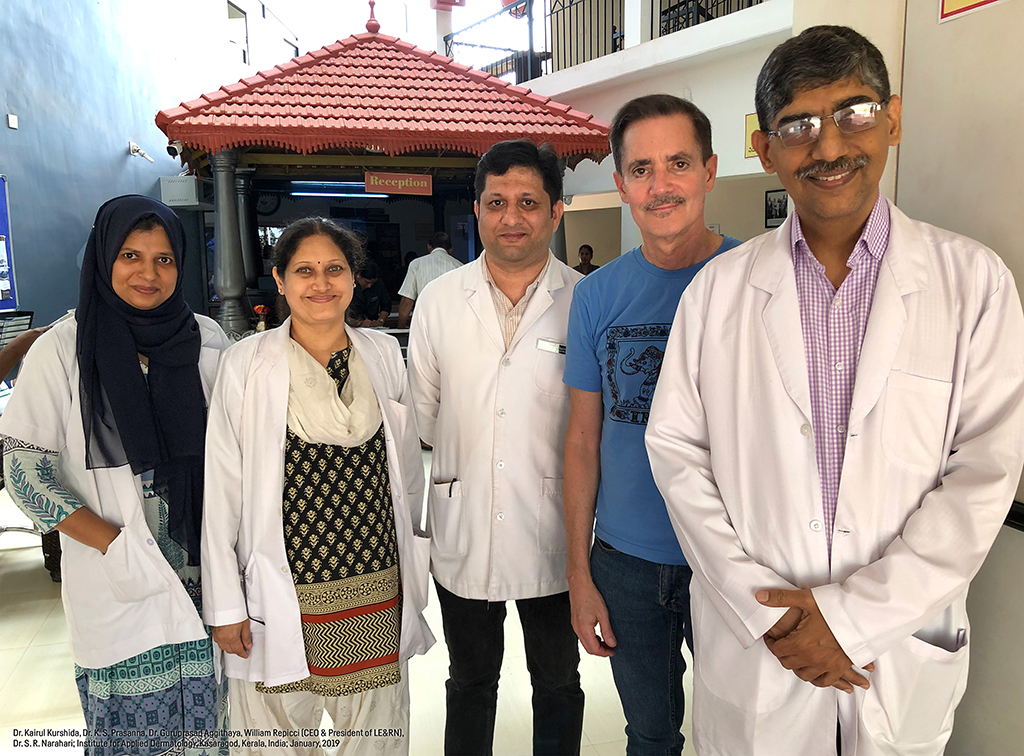 What do you hope for the future?

We hope that if our treatment is recognized or becomes part of national policy, it can reach the poor patients. There is a Ministry of AYUSH (Ayurveda, Yoga, & Naturopathy, Unani, Siddha, and Homeopathy) here and if the government of India decides to let this ministry take up treating lymphedema, then that will be one solution.

Can you talk a little bit about your clinic and how it’s set up?

We started it in 1999. We were operating in a rented building here in Kasaragod. Back then we worked on lymphedema, a little bit on AIDS, and on treating street children for skin ailments. Then we moved pretty much full-time to lymphedema and now we’re treating other difficult-to-cure skin diseases like vitiligo. In 2011 we opened this purpose-built clinic. The Department of Kerala gave us the land practically for free; they charged us 3,000 rupees.

At the Institute of Applied Dermatology, a team of doctors and therapists first examine the patient together. Then, based on the recommendations of these doctors, we prescribe a program of what we call Integrative Medicine, combining the therapeutics of Ayurveda, homoeopathy, and yoga into the mainstream of the patient’s treatment. This includes nutrition as well. We have a dietician who prescribes a regimen for each of our patients.

What does it mean to you to be known as a “people’s doctor”?

I quickly became a popular doctor here first of all because my treatment works, I read a lot, and I am knowledgeable. I’m also not a very expensive doctor and if the patient says they don’t have money, I won’t charge them. The same goes for my wife who is also a doctor. Lymphedema is a disease of the poor in India so—in a structured way—I’m treating neglected diseases of the poor. Whoever works for the poor becomes popular here! With this comes increased responsibility, though, and it takes up a large amount of my personal time, which I don’t like. But it’s not only me. The international lymphedema society has devoted a lot of support to this clinic and taken the time to answer our questions. This is a collaboration that makes me a popular doctor as well.