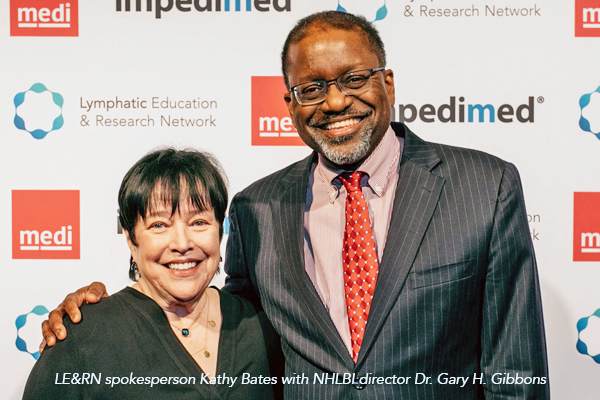 …We welcome the opportunity to collaborate with LE&RN, the lymphatics research community, and those affected by lymphatics diseases in building a blueprint to further define a structure aligning with the concept of a national commission for lymphatics research. Through a planning process…, we can evolve a collective approach toward setting a mission, strategic objectives, and structural format for a commission that engages researchers, patients, clinicians, and other stakeholders to advance lymphatics research to gain new insights and deliver relief to the thousands of Americans who struggle daily with lymphatic disease…”

When one is living with an incurable disease, the journey to finding a cure is painfully slow. Still, there has never been a time when the lymphatic community has more reason to be filled with hope. The National Institutes of Health (NIH) provides the greatest level of health-related scientific research funding in the United States. It could spend tens or hundreds of millions of dollars on grant proposals studying the lymphatic system and its associated diseases. First, our community needed to show that this research deserved to be a priority.

On January 7, 2022, I sent an Open Letter to NHLBI Director Dr. Gary Gibbons calling for renewed commitment on their part to the lymphatic agenda. On January 19, I was invited to present LE&RN’s position at a virtual NHLBI Constituency Group meeting.

Then on March 9, LE&RN’s efforts in Congress succeeded. The FY2022 Omnibus bill directed the NIH to establish a National Commission on Lymphatic Diseases and further called for the creation a NIH research category specifically for lymphedema (LE). Without a category to date, LE’s secondary status was being perpetuated. It also meant NIH was unable to report on levels of LE research when queried by Congress.

With all this in place, there was one key step left: NHLBI’s commitment to embrace Congress’ directive. The answer came to our community on March 18 when a representative of NHLBI wrote on behalf of its Director Dr. Gary Gibbons in response to my open letter. I urge you to read the full letter stating the activities, positions, and commitments of NHLBI. The planning is beginning for the National Commission, and NIH is already engaged in creating research categories for both lymphedema and lymphatic diseases.

The wheels of any bureaucracy turn slowly. However, when it comes to the lymphatic agenda, they are advancing at a speed many times faster than at any time in my ten years at LE&RN. Continued success will depend on the research community’s ability to support the activities of the ongoing Commission. Success will also only be realized if a growing lymphatic community of activists continues to make their desires known.

Today the community takes a well-deserved moment to congratulate itself. Tomorrow, the good work starts anew.