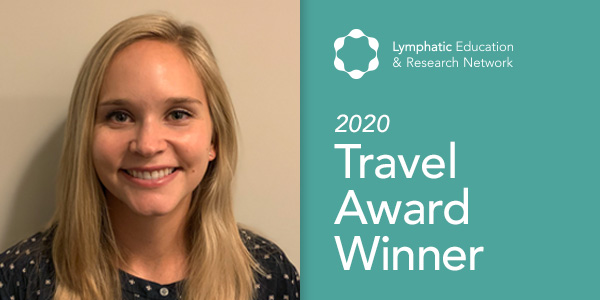 Natalie Nielsen, a recently graduated Ph.D. student at UNC-Chapel Hill under the supervision of Dr. Kathleen Caron, received a Travel Award from LE&RN to attend the GRC Conference on Lymphatics. We asked Dr. Nielsen to share her thoughts on that experience with us and to tell us a bit about her research and future plans.

What did you get out of the Lymphatic Conference? Why did you feel it was important to attend?
The GRC Conference on Lymphatics is one of the most prestigious lymphatic scientific meetings, with special emphasis on new and unpublished research. As a graduate student, attending this meeting allowed unparalleled access to scientific colleagues from around the world and the direct sharing of ideas and hypotheses. I was able to learn about cutting edge techniques to better visualize lymphatics, exchange information about infallible antibodies, and expand my knowledge of the role of the lymphatic system in different disease states. I felt it was important to attend this conference, as the lymphatic field has had explosive growth in the past few years. There is a plethora of new data emerging about the importance of the lymphatic system in human disease. Attending this conference allowed me to be at the forefront of these scientific discoveries.

What are your hopes and plans for your career and your research?
I hope that my research will help inform future studies, especially in relation to sex differences. The lymphatic field as a whole has understudied sex differences, and further research could have a real-life impact on patients suffering from diseases of the lymphatic system.

Why do you believe that, in general, lymphatic research is important? What might the field accomplish within the next few years?
I believe that lymphatic research is important because diseases of the lymphatic system affect up to 10 million Americans and hundreds of millions worldwide. Moreover, there are no treatments to treat these diseases, other than compression therapy. Thus, there is an extensive unmet need for treatments, which will only be possible with further research in lymphatic biology.